Traveling Art Project Inspires Students and Staff Across the District

For a week in March, Eastglen School students and staff shared their inner ambitions, written in chalk on a two-sided, 8-foot high and 20-foot wide wall. Beginning with the words, “Before I die I want to _______________,” students and staff filled the blank space with their own heartfelt desires. Some goals included: before I die I want to … “make a change,” “stop cancer,” “step foot on every continent” and “learn as many languages as possible.” 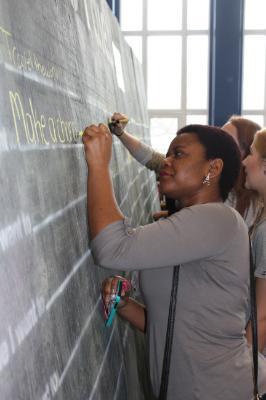 Before arriving at Eastglen, the Before I Die wall was carried over from Highlands School by the Eastglen football team. Highlands had the wall placed in a hallway so that students and staff walking by could grab a piece of chalk and add to the wall throughout the day. Some aspirations from Highlands included: before I die I want to… “run with bulls,” “eat ice cream with my kids,” “fall in love,” “change someone’s life,” and “own my own country.”

Highlands received the project from Ardrossan School, and the wall’s next appearance will be at J.D. Bracco School.

The Before I Die wall was inspired by the Taiwanese American artist, Candy Chang who started a community art project after losing a loved one. Using chalkboard paint, she painted the side of an abandoned house in her neighbourhood and stenciled it with a repeating grid of the sentence, “Before I die I want to __________.” Passersby picked up a piece of chalk and filled in the blank with personal, heartfelt ambitions. Since then, over 425 Before I Die walls have been painted in over 60 countries and over 25 languages. 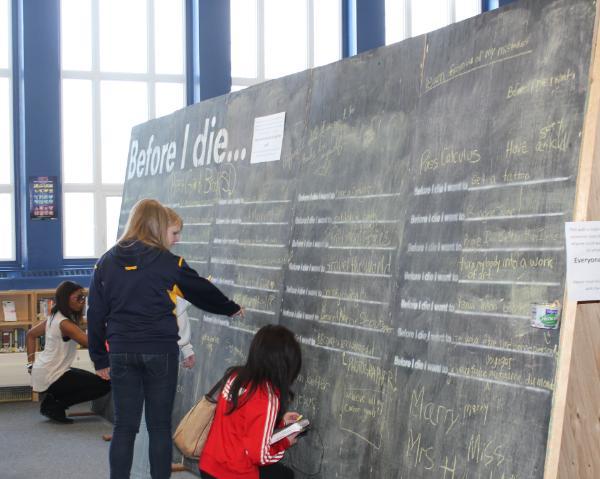