At the Board meeting on June 21, 2016, Trustees honoured three outstanding high school students with the Michael A. Strembitsky Award of Excellence, recognizing students who model inclusivity, leadership and compassion.

These students did research on brain cancer, worked with Somali youth, led their student councils, helped communities devastated by natural disasters, and raised money to help those locally and abroad – such as an Indian village in need of food and clothing, a girls’ orphanage in Mauritius and a children’s hospital in South Africa. For their outstanding contributions, they'll receive a medallion and cash award. 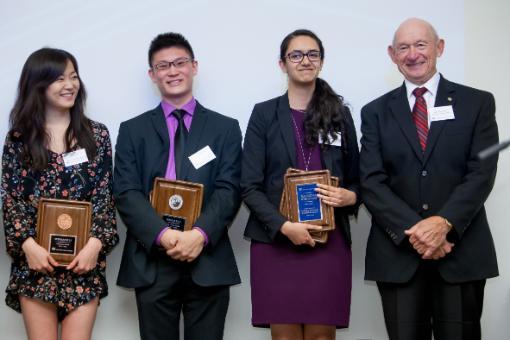 Dhunnoo is committed to academics, leadership and helping those in need both locally and abroad. She was a member of a school-based committee that partnered with a charity to help 4,000 people displaced by natural disasters and war. She collected books for a children’s hospital in South Africa, raised money for a village in India that was in desperate need of clothing and food, and hosted a fundraiser garage sale to help a girls’ orphanage in Mauritius. She personally delivered these items with her family. Dhunnoo is also a musician, an athlete and maintains a high academic average.

Lau is passionate about giving back to the community and helping his fellow students. He took the lead on hosting various events to raise awareness and funding for PTSD for first responders. At the school level, he volunteers with the environment club and the annual initiative to host a meal for the inner city community. He works with Somali youth, belongs to the swim team and is a regular volunteer with the Edmonton Chinese Bilingual Educational Association. In Grade 10, he worked with Big Brothers Big Sisters to create a database to manage their volunteers at 11 different sites.

Li was recognized for her commitment to volunteerism, academics and her fellow students. She worked as a student researcher at the University of Alberta where she was part of a team looking at whether viruses could be used to treat brain cancer. She served on student council, led the school’s Gay Straight Alliance and worked with Canadian Blood Services to find a way to store cord blood for newborn babies who need transfusions. In addition, she is an advocate for student mental health, volunteers with the Boys and Girls Club of Edmonton and other charities, maintained a 95 per cent average, belonged to the school’s swim team and plays multiple instruments.  She was recently awarded the prestigious Loran Scholarship worth a total of $100,000 over four years.

Read their full biographies and learn more about awards and scholarships available to District students.