In December 2018, we asked the public to help name three new schools in our District that will open September 2021. We received almost 160 suggestions! After reviewing the submissions, a short list of recommendations was provided to the Board of Trustees for final selection.

At today’s public meeting, the Board of Trustees announced the new school names. This video reveals the three remarkable new school namesakes who have made lasting impacts on our strong, diverse community.

Aleda Patterson School (Afton site K-3): Aleda Patterson is a former teacher in the District. She was instrumental in establishing the Personal Development Centre, now known as The Support Network. She is also the founder of the Edmonton ABC Head Start program. The idea for ABC Head Start came to Patterson when she was living in Colorado. Patterson noticed the local ABC Head Start van in her neighbourhood and contacted the program to find out more. She took a training session and brought the concept to Edmonton in 1984. Patterson recruited her teacher and social worker friends to help get the program started. This program was initially funded by Patterson and her friends. Since 1984, ABC Head Start Society has grown from a single location serving 10 children and families to a comprehensive early learning, family support and community program, supporting over 430 families at different locations throughout Edmonton. Patterson also founded the Scarecrow Festival, which raised over $1 million in 10 years for both ABC Head Start and Kids with Cancer. Learn more about Aleda Patterson.

Alex Janvier School (Westlawn site 4-9): Alex Janvier was born of Denesuline descent with the Cold Lake First Nations. He is a pioneering artist in Canada and speaks of having a creative instinct from as far back as he can remember. Janvier received formal art training from the Alberta College of Art in Calgary where he graduated with honours in 1960. He is a member of what's commonly referred to as the Indian Group of Seven and paints both the challenges and celebrations that he has encountered in his lifetime. Although he has completed several murals nationally, Janvier speaks of the over 400-square-metre masterpiece entitled Morning Star at the Canadian Museum of Civilization as a major highlight in his career. Two other notable public commissions include Tsa Tsa Ke K’e or Iron Foot Place at Rogers Place in Edmonton, and the diptych, site-specific installation of Sunrise and Sunset at the Legislative Assembly of Alberta. Janvier’s passion and natural talents for creative expression remain strong to this day. Learn more about Alex Janvier.

Garth Worthington School (Chappelle East K-9): Garth Worthington was a lifelong musician and singer who shared his love of music both in and outside the classroom. During his 33-year career with Edmonton Public Schools, he served as a teacher, assistant supervisor of music, consultant and music curriculum co-ordinator. During this time, he mentored many students and advocated for music programming and performance opportunities throughout the District and city. He was one of the creators of Night of Music, an annual showcase of students from Edmonton Public Schools, now in its 55th year. For over 20 years, Worthington also worked with the Edmonton Centennial Singers, a choir of students from across the city. Learn more about Garth Worthington.

“It is a very proud moment for our Board to name our new schools after strong leaders who reflect the diversity of our students and staff and who epitomize the District’s values of accountability, collaboration, equity and integrity,” said Board Chair Michelle Draper. “They represent the importance of providing opportunities for all students, regardless of their background, interests or abilities.”

Thank you for helping name our new schools! Submitted names that were not chosen will be kept on file and could be selected for a new school in the future.

Learn more about our new schools and the status of their openings. 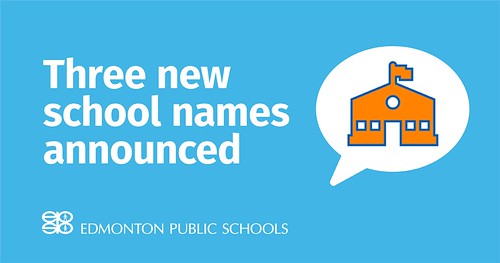